My Keralan Adventure - Part 2: Yoga, Theyyam, Puja and then...all aboard the houseboat!

The glorious backwaters of Malabar

Being in paradise is all very well but adjusting to the fact that the sunlight isn't coming in to give you a gentle nudge and help the iphone wake you up in the morning can be something of an obstacle! Luckily Ganesha, the God who removes obstacles reminded me that I had good reason to peel myself from my super comfortable, enormous bed - the first yoga class was calling and he was the star.

It's difficult to write about Heidi Pascual's yoga classes without becoming verbose and massively over-using superlatives, so when I say I'll do my best not to, please note that I don't mean it!

A beautiful schedule of classes lay before me and the rest of the group - 20 beautiful yogis. Heidi had promised a deity a day and that is exactly what she gifted to us. Our group practice took place in the Patanjali shalla overlooking the beach and opened with a grounding Ganesha Sadhana. Every Adho Muka Svanasana (downward dog) became Ganesha pose and with it a sense of strong connection and rooting into the earth or the sand! Heidi weaved her alchemical gift of marrying mythical storytelling with creative sequencing through a series of standing and then seated poses, returning regularly to ganesha pose to enable everyone to re-ground, re-connect and really embrace the theme.

Lakshmi offered up a heart and hip opening practice choc full of love while the focus of the evening class was Tara - goddess of compassion and serenity. One of my absolute favourites and another masterpiece of sequencing - the opening story of how Tara arose from the tears of the Buddha when he first regarded the suffering of the world will stay with me forever.

Throughout the week we met and celebrated the devas and devis. In Hanuman Sadhana, the fearless monkey god and hero of the Ramayana came alive as we each found our own shradda along with the inner courage we needed for this full throttle 3 hour class but OMG did it feel good afterwards - soul and body cleansed- tick.

Each class had been meticulously prepared and was presented with love, truth and heartfelt enthusiasm. I could go on and on and on about the yoga but I'll practice self-restraint and just say that if you love vinyasa yoga and Hindu mythology and you want to experience a thoroughly well planned and carefully thought out retreat, then do take a look at Lotus Love Yoga - you can read more about this retreat, see feedback and photos from the rest of the group and also discover Heidi's future ones as well as find details of her classes and teacher training. I have selfishly already put my name down for the ones I want to attend so I'm quite happy to share this with you ;)

During the week we had the opportunity to experience some local activities and excursions. The itinerary was interesting varied, catering to different desires and as usual Mr Jayan and his team made us feel that nothing was too much trouble and everything could be arranged or adapted to suit our needs.

The Theyyam - a feast for the senses

A dramatic, colour infused form of ritualistic theater, the Theyyam is unique to the Malabar coast of northern Kerala. It's held each year between November and March so we were able to catch one of the last celebrations in a local village, just forty minutes drive from the retreat.

Theyyams were originally held to appease the Gods as well as, honouing and remembering ancestors, they are thought to pre-date Hinduism. The rights to perform a Theyyam are restricted to certain communities and families, traditionally from the lower castes, with the practice being passed down from generation to generation.

Elaborate make-up, costumes, procession, dance, drumming and ritual are brought together in each Theyyam which honours a specific Deva or Devi - God or Goddess and was often held to preserve the prosperity of the village after a successful harvest. The Goddess Bhagavati featured in the Theyyam we saw - a popular goddess in this particular village. 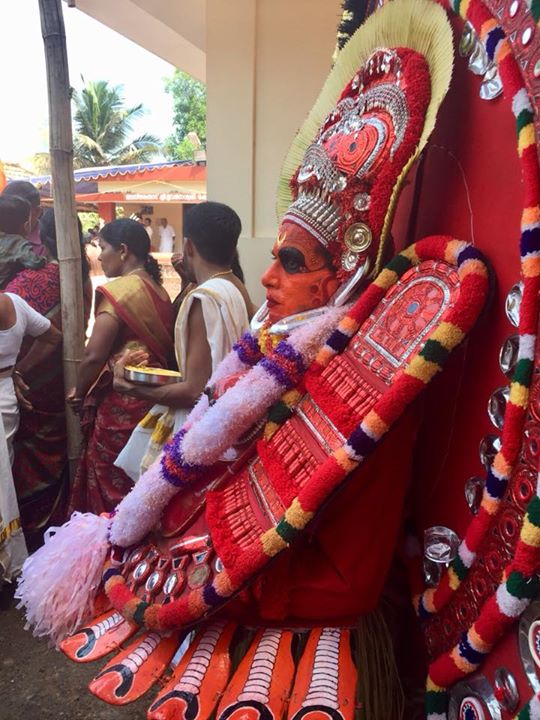 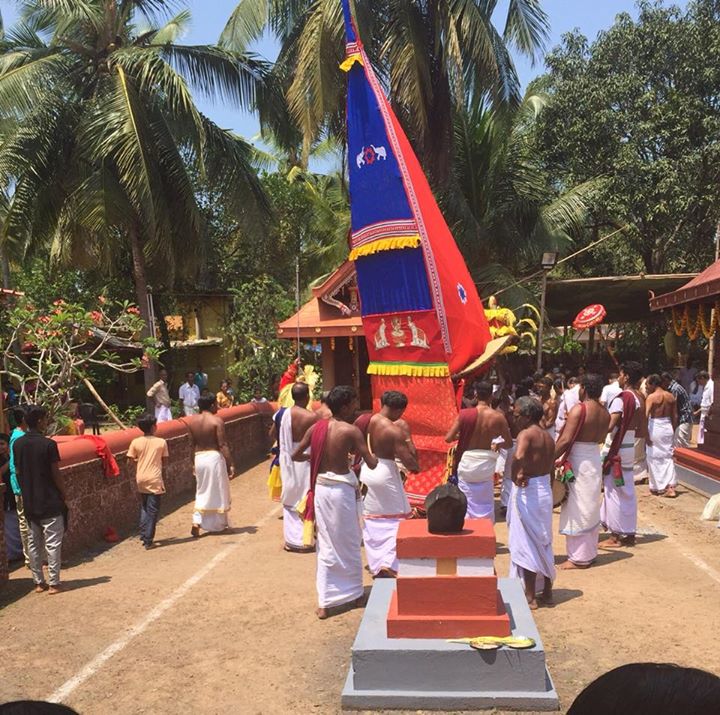 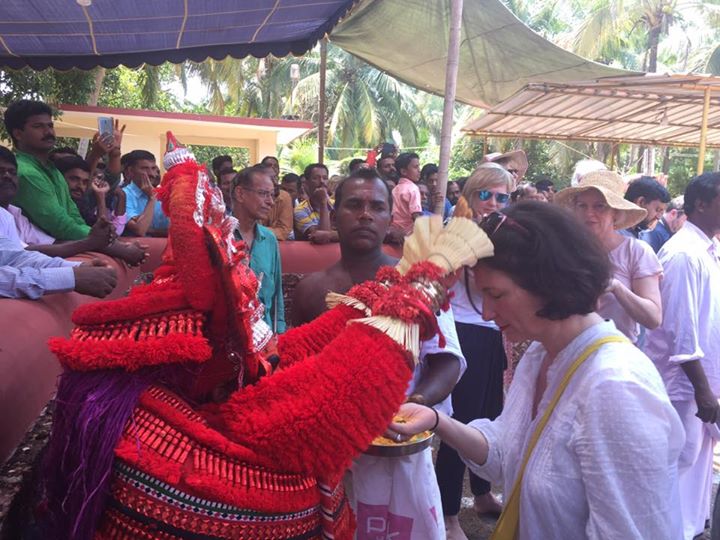 The music, which accompanies the drama is renowned for its fervour and frenzied beat. The drum (chendra) is used to great effect and symbolises an asura vaydam or instrument of the demons. The visual spectacle is no less dramatic - it takes hours to apply the dense and detailed make-up. Aggressive or easily agitated deities are associated with red which is set against white or yellow to really enhance the furious element. Gravity defying head gear and ornamental decoration on the torso complete the elaborate costumes which often require an entourage to help the actor move and perform their part. During the celebration the devi offers blessings in the form of turmeric powder which protects the receiver and ensures that no evil eye will cast its spell. In the past villagers would bring offering of food for the performers but this has been surpassed by cash and the ritual sacrifices which were very much a part of the ceremony have thankfully died out.

The celebrations often go on for days and the large crowds that come along show how popular the event remains today. The addition of trinket, sweet, toy and balloon stalls makes it feel a little bit like a village fair and there is a real sense of community along with an over-riding sense that people truly want to honour and uphold local ancients traditions and keep them vibrantly alive for future generations to come.

Not content with being the best retreat manager in Kerala, Mr Jayan informed us that a neighbouring village was holding a festival of light puja. What amazing good luck, this annual festival takes place just once a year and we had the unique opportunity to witness it first hand.

A very short, air-conditioned mini bus ride from the retreat we were safely deposited at a local temple where serious preparations were clearly underway. Row upon row of fence like structures, each with built in oil holders were been readied for the ceremony. We were quickly put to work with handfuls of wicks which needed to be placed in each of the holders.

Leaving our shoes at the entrance we timidly ventured inside the building, eager to absorb this new experience but also uniquely conscious that we didn't really have a clue what was about to unfold. A temple structure sat in the middle and it was clear that something ritualistic was being prepared inside. The matriachs were keen to include us and show us how to apply the turmeric and kukuman powder to our foreheads - a blessing of protection and to bestow us with flowers - due to my limited grasp of malayalan I wasn't able to find out the meaning behind the flowers but they looked pretty.

A group of youths drummed away enthusiastically in one corner as the crowds began to grow and gradually the now tightly packed throng started to surge forwards a little. I hold a vivid memory of the look of anticipation and excitement etched onto the face of an elderly man as he appeared to hold his breath with expectation. I recall at the time having a burning desire to capture it on camera but I wouldn't have dared to and I doubt very much that I would have done it justice. Finally the brahmin appears at the door with a large metal bowl full of dancing flames. Arms shoot out as the people nearest the front reach out for the offering of purification. I see my friend Lou in there and think how brave she is to be right in the thick of things but also how unobtrusive she actually looks - it's all a tiny bit surreal. The second brahmin offers purifying water, ladling it into upheld palms. Quite suddenly I find myself drawn in and there is no turning back! Still not quite feeling totally at home I go along with it and begin to embrace the experience, trying to channel my best Lou impression of looking totally chilled and at home despite my bewilderment.

As the sun descends we move outside and are given torches to light the thousand upon thousands of wicks which together create the most incredible light infused display. Entire families take part in this and even small children are entrusted with the task.

We do our bit to help creates the spectacle but as our torch flames begin to smoulder and finally extinguish we head back to camp, grateful for the authentic experience and the generous nature of the community that not only allowed us to share their religious celebration but made us all feel so incredibly welcome. 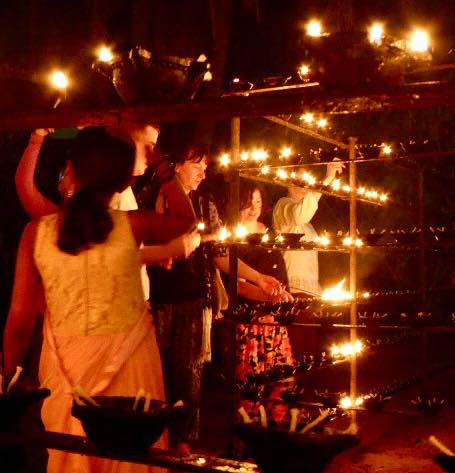 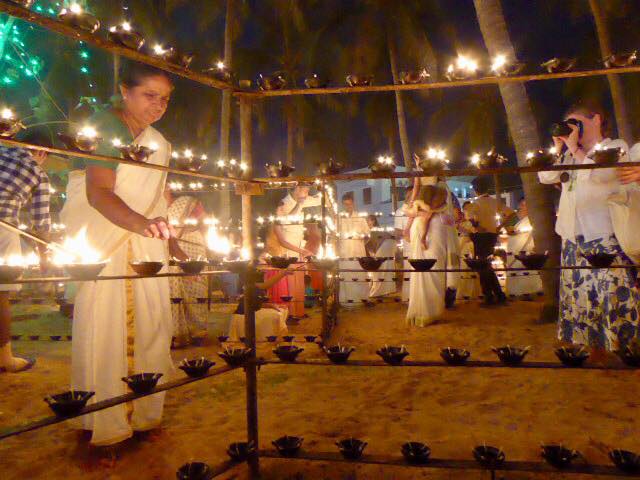 Lotus Houseboat - a soulful saunter through the tranquil backwaters

With the retreat coming to an end what better way to end this incredible holiday than with a relaxing cruise along the backwaters in Neeleshwar's own houseboat - the Lotus boat. Once on board we were treated to tea and delicious indian treats including some yummy onion bhajis and deep fried banana. The views from the top deck offered a glimpse into rural village life, these waterways were the main link between villages in earlier times before Kerala had any real road network and they remain vibrant and alive with colourful fishing boats moored along its banks.

So with yogis departing for the UK early the next morning it was sadly time to say farewell and also time to go it alone .....next stop the tea plantations of rural Munnar and the big city of Cochin.

My Keralan Adventures. Part 1: Heaven is a yoga retreat at Neeleshwar Hermitage!